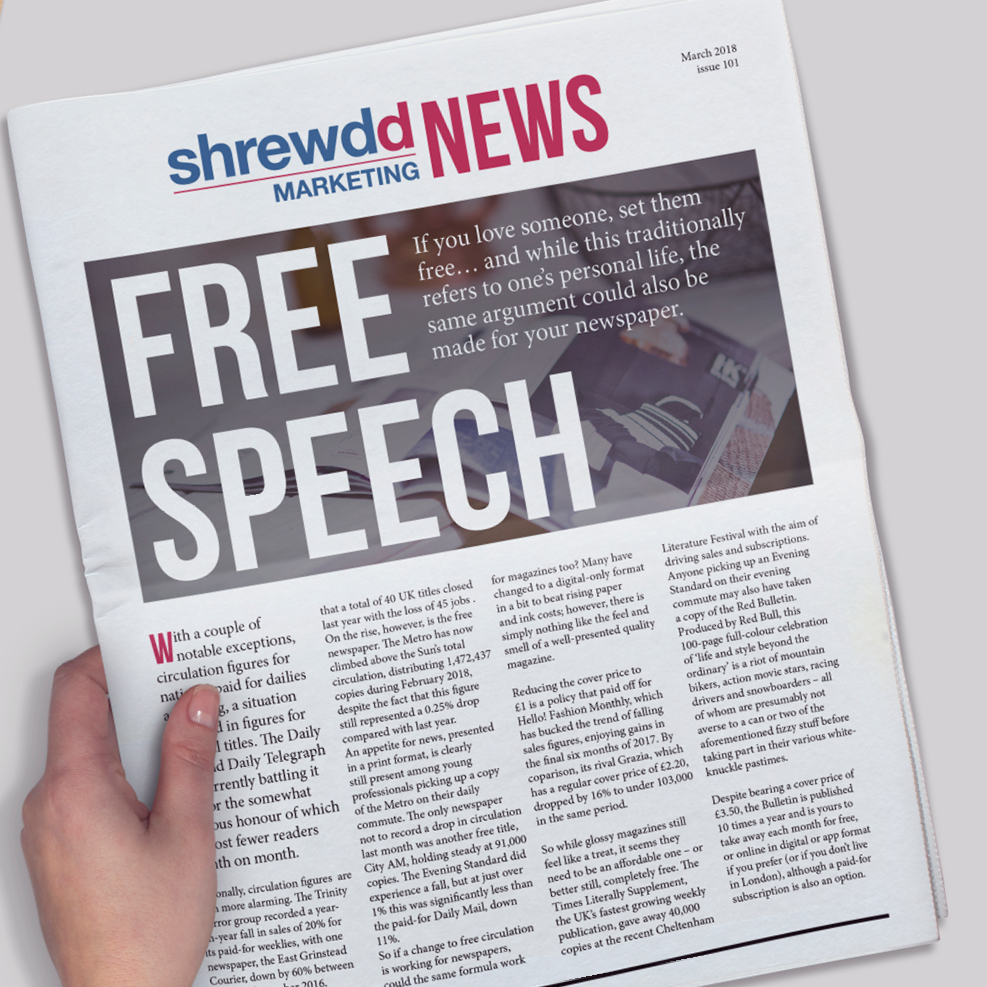 If you love someone, set them free… and while this traditionally refers to one’s personal life, the same argument could also be made for your newspaper.

With a couple of notable exceptions, circulation figures for national paid for dailies are falling, a situation mirrored in figures for regional titles. The Daily Star and Daily Telegraph are currently battling it out for the somewhat dubious honour of which has lost fewer readers month on month.

Regionally, circulation figures are even more alarming. The Trinity Mirror group recorded a year-on-year fall in sales of 20% for its paid-for weeklies, with one newspaper, the East Grinstead Courier, down by 60% between July and December 2016.

The worrying result of this was that a total of 40 UK titles closed last year with the loss of 45 jobs.

On the rise, however, is the free newspaper. The Metro has now climbed above the Sun’s total circulation, distributing 1,472,437 copies during February 2018, despite the fact that this figure still represented a 0.25% drop compared with last year.

An appetite for news, presented in a print format, is clearly still present among young professionals picking up a copy of the Metro on their daily commute. The only newspaper not to record a drop in circulation last month was another free title, City AM, holding steady at 91,000 copies. The Evening Standard did experience a fall, but at just over 1% this was significantly less than the paid-for Daily Mail, down 11%.

So if a change to free circulation is working for newspapers, could the same formula work for magazines too? Many have changed to a digital-only format in a bit to beat rising paper and ink costs; however, there is simply nothing like the feel and smell of a well-presented quality magazine.

Reducing the cover price to £1 is a policy that paid off for Hello! Fashion Monthly, which has bucked the trend of falling sales figures, enjoying gains in the final six months of 2017. By comparison, its rival Grazia, which has a regular cover price of £2.20, dropped by 16% to under 103,000 in the same period.

So while glossy magazines still feel like a treat, it seems they need to be an affordable one – or better still, completely free. The Times Literally Supplement, the UK’s fastest growing weekly publication, gave away 40,000 copies at the recent Cheltenham Literature Festival with the aim of driving sales and subscriptions.

Anyone picking up an Evening Standard on their evening commute may also have taken a copy of the Red Bulletin. Produced by Red Bull, this 100-page full-colour celebration of ‘life and style beyond the ordinary’ is a riot of mountain bikers, action movie stars, racing drivers and snowboarders – all of whom are presumably not averse to a can or two of the aforementioned fizzy stuff before taking part in their various white-knuckle pastimes.

Despite bearing a cover price of £3.50, the Bulletin is published 10 times a year and is yours to take away each month for free, or online in digital or app format if you prefer (or if you don’t live in London), although a paid-for subscription is also an option.

In the years since its 2007 launch, its global circulation has grown to 2.7 million. Far from being a glossy marketing ploy, the revenue stream is the same as most consumer publications including subscription and ad sales – with 12 editions in five different languages, from the UK and US to Germany, Brazil and Mexico.